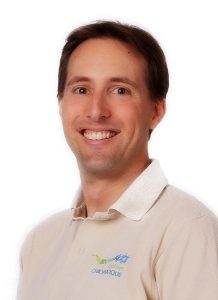 Sierre, a native of Lensarde, I went to the Three Lakes Region for my university studies. After my first medical course at the University of Neuchâtel, I flew to the United States for chiropractic studies with a doctorate at the Western States Chiropractic College in Portland, Oregon. Oregon is a beautiful region that looks very much like Switzerland by its vegetation and the sympathy of its people.
Back in Switzerland at the beginning of the year 2000, I started a two and a half years of assistantship with Dr. PC Tschumi, a chiropractor in Sion. I passed a radiological protection and radiological examination in 2000 and finished my studies in 2002 with an intercantonal examination of chiropractic.
January 2003 marks the opening of our chiropractic practice in Sierre, which will become a cabinet vis-ta-vie in 2012.
My interest in the sport is no longer to prove, it is quite willing that I devoted myself, during the season 2003-2004, at the service of the Sierre Lions, Swiss streethockey champions in 2003 and 2004. I also had the chance to accompany the Swiss U20 team of streethockey at the World Championships in 2004, in Slovakia.
I also took care of the 1st VBC Sion women’s team during the 05-06 season, when they signed the feat of finishing Swiss league champions B.
In recent years, I have focused my attention on learning and behavioral disorders, and how to affect the nervous system to remove it from the conditioning of the past.
My goals, with the Network Method and other powerful tools such as the Demartini Method, are to unleash the child’s genius, to teach you effective strategies to help you develop your own natural healing abilities, and you help you be better in your head and body to make healthier choices for your life.
http://vis-ta-vie.ch/accueil